Origins of the Sommelier 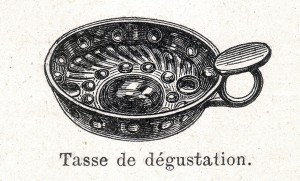 The word “sommelier”, or wine waiter, may have stemmed from the old French words “sommerier”, “somier”, and “bête de somme”. In this old French language, a “bête de somme” was a “beast of burden” and the “sommelier” was its herdsman. Later, the word became more specialized and referred to the official responsible for the transport of the French Royalty's baggage when they traveled (1316). During the reign of Louis XIV, the sommelier was the official in charge of the transport of baggage when the court moved. In the household of a great lord, he was the official who chose the wines, table settings and desserts. The sommelier used his tastevin, a silver saucer on a thick silver chain worn around the neck, to check his lord’s wine for poison. He also checked the food. If the sommelier died, his Master would avoid the meal.

Today’s sommelier has slightly improved working conditions. There is very little threat of being poisoned, not by food anyway, but perhaps by over-consumption of alcohol. Tuxedos and tastevins are still out there, but today’s sommelier, even in the most formal dining room, is more likely to wear a suit and keep the silver tasting cup in a side pocket. Today’s sommelier is also more likely than ever before to be female, and young. In general they are humble and hospitable, but watch out for the snobs. They are still out there.

Reality:  Sommeliers many times double as floor managers, closing several nights per week, even in the sommelier mecca of Las Vegas.

What does a sommelier do? Primarily there to help guests select wine, make sure it is sound, and then to keep glasses full throughout the meal, a top notch sommelier such as Master Sommelier, for example, or a Concours Mondiale champ is also expected to be able to answer questions about production methods of wines and spirits, international wine laws, wine regions, grape varieties, and the harmony of food and wine. Service and salesmanship skills of waters, liqueurs, brandies, ports, and cigars are also required. A good sommelier is a showman or woman when out on the floor; the act of decanting a bottle of wine, for example, or sabering a bottle of Champagne (opening with a sword), adds an air of drama to the theater of dining. Good sommeliers understand that the dining room is a theater, and that “the dance," the meal service, must go smoothly no matter how frantic things may be in the back.

Your job is so cool! Yeah right. Behind the scenes, sommeliers know that things are not quite as glamorous. In the back of the house, or the part of the restaurant diners don’t see, a sommelier may have to trek through fish guts, meat byproducts, water, puddles of bleach, parking garages, rain, sleet, or snow, to get to their cellars. Once they get there, they may have to inhale just to turn around, or to squeeze through an aisle. The typical restaurant wine cellar is an afterthought, and is makeshift at best. Ideal size, shelving, temperature, humidity, and lighting are pipe dreams for most sommeliers.

Often the sommelier must navigate through the combat zone-the kitchen, making hairpin turns with arms laden with bottles sometimes costing thousands of dollars, or go up and down what we called “the stairs of death”, slippery metal stairs with slippery railings, that were also traversed by underpaid and under-appreciated dishwashers swinging red hot 50 pound metal pots or worse, knives.

Before service, there are many chores. Sommeliers evaluate wine daily, looking for value and menu compatibility. They meet with vendors and place orders. They receive and stock the wines, lifting cases and climbing up and down stairs and sometimes ladders to place the bottles in their racks. They take physical inventory regularly, oversee staff training, and are responsible for running a profitable wine program. Off duty, they read stacks of trade and consumer publications, occasionally visit wine regions, and try new foods and wines while checking their competitors and, at the same time, honing their palates and pairing skills.

Establishments that feel wine is an integral component of their program will invest in a wine program with passionate leadership. If an establishment wants to garner a wine award, it will be necessary to spend money in both inventory and someone whose primary function is to manage it, sell it, and train the staff. Beth von Benz, former Wine Director at New York City’s Judson Grill, says, “It is imperative to have a qualified wine person on the floor. The modern customer is more sophisticated with wine, than they were in the past. They expect to find a qualified wine person on the floor in a good restaurant. With an increasing emphasis on international wines, many from obscure areas or from little-known producers, a guest needs help navigating through a list, or a gentle suggestion on an unfamiliar wine that might be a delightful pairing with the restaurant's cuisine.”

Some restaurants, such as Alain Ducasse in NYC, his place in Monaco, Le Louis XV, or Aureole in Las Vegas, have teams of sommeliers. Because these establishments fully support a strong wine program, they are excellent environments for expanding one’s palate and trying new wines.

Sommeliers are a passionate bunch. They are not highly paid, but they love their medium. Embrace the skills, talent, enthusiasm and knowledge of the sommelier the next time you are fortunate enough to be in the company of one. You might just be pleasantly surprised.